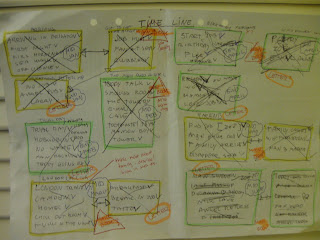 The picture shows the plan I made up before starting the 3rd draft of Replacing Angel - my novel in progress.

A summary: A young Swedish girl called Natalie goes to Brighton to stay with her English friend Angel. But Angel announces that she's going travelling and Natalie is left with Angel's room, Angel's job, Angel's friends and Angel's lovers. But she can't have the Man - Angel's boyfriend. Basically it is a coming of age story. A battle between wanting to lead somebody else's life, but realizing that you have to find your own way in the end ...

I don't mean I have to make the story longer. It'll be probably be shorter in the end ...

I'm a big fan of dividing things into sections and chapters and come up with titles. At the moment my chapter titles are:

Some agents advice you not to write a prologue or an epilogue. I think I might get away with it by calling it "Before the beginning" and "After the end". But that might change ...

My next step is to polish this 3rd draft. Then I'll send it to a few trusted writing friends who hopefully will give me some useful feed back. After that I'll embark on a 4th draft ... Then there'll be a 5th draft that will only deal with grammar and spelling.

My long term plan is to send my stuff out to agents in January. I might finish before then, but January seems to be a good time. No big book fairs, the Christmas rush will be over and the agents will be willing to work with something new ...
Posted by Louise Halvardsson at 11:04