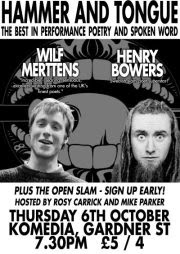 I'm performing at the following events:

Story Studio, Sunday 2 Oct, 8pm at Komedia, Brighton
Am one of the guest for the Feast & Fetish Theme, and will be reading my flash fiction story "Common Fetish"

Posted by Louise Halvardsson at 23:15 2 comments: 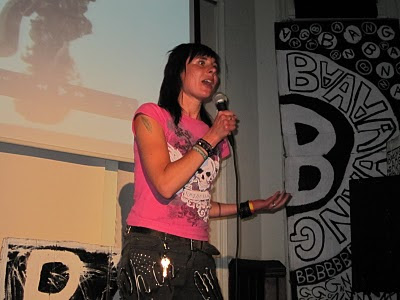 I've come second and third several times. But this was the first time I actually won a poetry slam! And not any poetry slam ... Bang Said the Gun is a poetry collective that runs a weekly poetry night in south London. They took their show to Edinburgh Fringe Festival and were awarded with 5 stars. I can only but agree!

I happened to be a London for two reasons:

I had no idea that the third reason for my London stay would be Bang Said the Gun. I only found out about it a few hours before the show kicked off, and decided on a whim to perform Making Over My Landlord, so maybe the spontaneity contributed to winning: I was quite relaxed, and did it for fun. And fun it was. On the tables were empty plastic milk containers filled with little stones (???) for the audience to rattle. It felt like being part of a massive maraca orchestra. 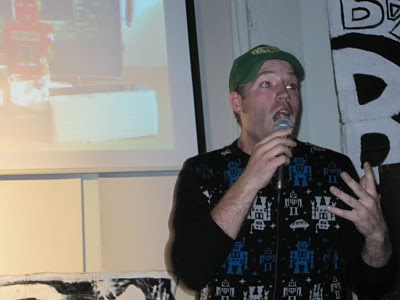 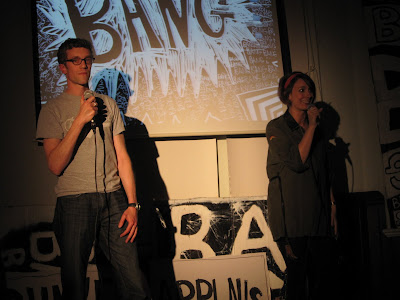 I was also very impressed by Richard Marsch's and Katy Bonna's poet duet. They performed a piece about stag and hen nights ... 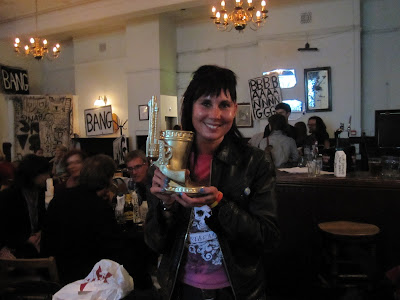 Me with my trophy: a golden welly boot gun! And best of all I got invited back to perform at the next event which is Thursday this week! 8pm at the Roebuck Pub in Great Dover Street, London (nearest tube is Borough) Join the Bang!
Posted by Louise Halvardsson at 16:59 4 comments: 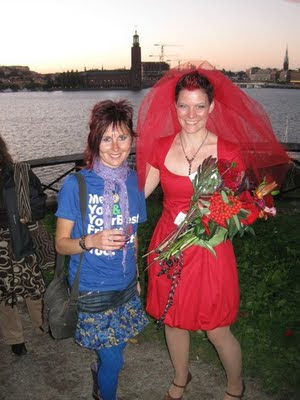 Today it's 2 years since one of my very best friends Sara married herself, and took the new surname Starkström which means "high voltage" or "strong power" depending on how you look at it ..
I was (one of) the bridesmaid in blue and Sara was the bride in red ...

She married herself to celebrate herself
as a way of celebrating her own and everybody's self-worth and self confidence.
A way of showing that she loved and respected herself and wanted to commit to her own truth.

This doesn't mean that she can't have a partner, it's just an manifestation of that you need to love yourself before being able to love someone else.

Sara is also the author of Game Girl
- a female version of Neil Strauss dating handbook The Game.

See more pictures of the Wedding on Sara's blog.

At the time Sara didn't think of it as an art project, the idea of marrying herself was just something she had felt very strongly about for a long time, and I really admire her for this. I was very honoured to be part of her wedding day, and it's not until now that I look at it as a performance art piece.
Posted by Louise Halvardsson at 22:17 1 comment: 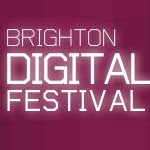 There seems to be at least one festival on every week in Brighton... On Sunday I'm taking part in Flash Lit - a short story slam that is part of Brighton Digital Festival.

I don't think you can compete in writing, but I do it for fun! Honestly. I've written four very short pieces especially for this event, and if I make it to the final I get to read three of them.

How? Turn up and make a big noise when I read! (It depends on the audience who makes it to the final ...)
Posted by Louise Halvardsson at 18:18 4 comments: