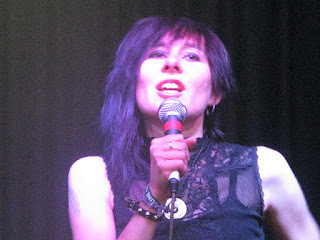 On the international poetry scene Louise Halvardsson is also known as Lou Ice. She started to write and perform poetry in English in 2004, and since then Lou Ice has been on stage in Brighton, London, Edinburgh, Stockholm, Berlin and Auckland. In 2011 she won two slams: Bang Said the Gun in London and Hammer & Tongue in Brighton.

She has hosted events at Hove Library, like Every Day is Poetry Day and has facilitated workshops for young adults at Brighton & Hove Libraries.

She now lives in Sweden, runs the collective Poesiwerken and has published several books, including Swenglish, a documentary novel that is available in English.