Towards the National Poetry Slam Championship in Sweden! 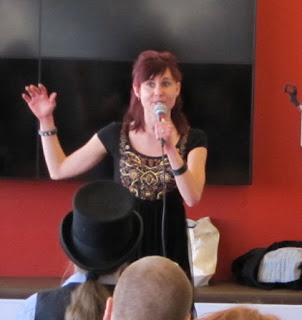 Today I took part in a poetry slam in Växjö, Sweden. I came second which means I'll be one of four people representing my county in the National Poetry Slam Championship in Malmö in May!


I'm super happy as I haven't been on stage in Sweden for years. Almost all my material is in English, but I wrote three poems in Swedish especially for this competition. You can watch some of my poems on YouTube.


PÅ SVENSKA
Posted by Louise Halvardsson at 20:13 No comments: 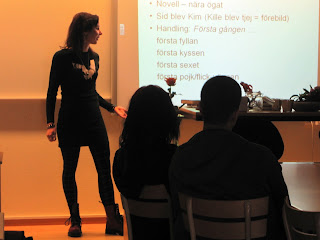 Today I visited a college in Sweden and talked about the background of the book, why and how I wrote it.

It all started with a short story I'd written when I did a writing course. It was about a girl called Amanda who wanted to have a piercing done by her older punk friend Sid, but he refused to do it, said it was too close to the eye. In the opening chapter of "Punk industrial hard rocker with attitude", Amanda the main character wants her nose pierced by her older female friend Kim (Sid had to change both name and sex!), but Kim says no and helps her to colour her hair instead.

I also revealed that the novel has no plot. But I let Amanda overcome some traumas that pushed the story forward. The trauma of experiencing the first piss-up, the first kiss, the first sex, the first boyfriend. I thought those things were very traumatic when I went to school and I still feel very uncomfortable walking into a school building. Even the teachers could relate to what I was talking about, confirming the unwritten laws about who's popular and who's not.

I didn't have much time to talk about my current book project, Swenglish, but you can read all about it here.

PÅ SVENSKA
Posted by Louise Halvardsson at 17:34 No comments: