On the Road in Sweden and England 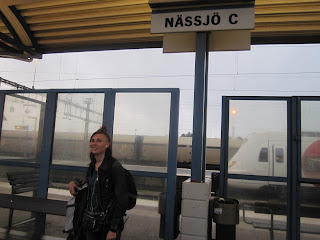 I've been on the road for most of the year because of my Swenglish project. Now I've only got a week and a half left and still don't know where to settle, perhaps I'll keep moving back and forth between Sweden and England for the rest of my life ...

The other day I watched On the Road (based on Jack Kerouac's classic novel) with Swenglish host number 29. Even though the book is better of course, I was positively surprised by the film. And I was reminded of one of the reasons why I started to write ... The main character Sal Paradise says:

“the only people for me are the mad ones, the ones who are mad to live, mad to talk, mad to be saved, desirous of everything at the same time, the ones who never yawn or say a commonplace thing, but burn, burn, burn like fabulous yellow roman candles exploding like spiders across the stars.”

When I grew up I was a very quiet and shy girl, but in my teens I was drawn to the so-called mad people described in the book, and I loved and still love reading books about mousy people following more colourful people on great adventures. Apart from Sal Paradise following Dean Moriarty in On the Road, I loved reading about Patrick Keane following Will Savage  in Jay McInerney’s The Last of the Savages.

I would appreciate if someone could recommend books where mousy girls follow colourful women on great adventures. In my debut novel ("Punk industrial hard rocker with attitude") the main character Amanda kind of follows her older friend Kim, and I've realised that most of the stuff I write is based on this notion of meeting a person that will bring some danger into your life and changing it.