The Wheel is Spinning 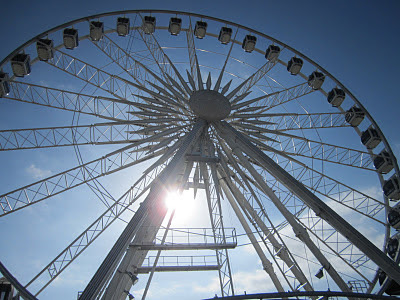 I've posted a lot of letters

I've set something in motion

The world is spinning and I'm spinning with it

I'm about to embark on a creative non-fiction project

(There's now a wheel on Brighton seafront. I'm not desperate to go on it, but it seems to fit with the changes I'm making. The wheel also steals the attention from the pier.)
Posted by Louise Halvardsson at 22:28 No comments: 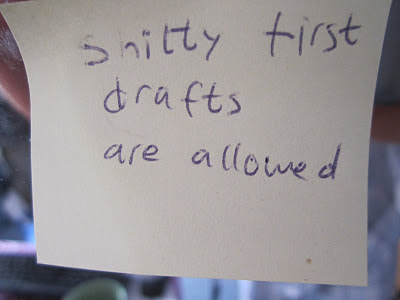 It's mid October and so far this month I've managed to write 8500 words. So in total I've got 28500 words as I started in August. (I've written more words than that, but half of what I write is just random ramblings to find out what it is I'm trying to say, making notes etc.) I never used to obsess about word counts, but at the moment it does help me to move forward.

What inspires me is to hear how other writers work. I read a really good article about Jeffrey Eugenides in the free We Love This Book magazine. He has only written 3 novels with an interval of 9 years in between each novel. It doesn't mean that he's lazy - he's writing all the time, but it's just a matter of getting it right, without being a perfectionist. In the interview he said that his current novel, The Marriage Plot, grew out of the backstory he wrote for a character in an abandoned novel.

The novel I'm working on at the moment sort of started back in 2007 when I spent 5 months in Thailand, but at the time I was too close to the environment I was writing about, so now 4 years later I'm ready. However I'm still struggling with the voice and the structure and I have 2 different ideas of how to tell the story ... At the moment I'm just trying to get the story down, by writing it in a quite traditional way of first person, past tense, but it's very likely to change in the second draft.

"I haven’t had trouble with writer’s block. I think it’s because my process involves writing very badly. My first drafts are filled with lurching, clichéd writing, outright flailing around. Writing that doesn’t have a good voice or any voice. But then there will be good moments. It seems writer’s block is often a dislike of writing badly and waiting for writing better to happen."

(I think I first found this quote on the A Salted blog, thanks! And the post-it note saying "shitty first drafts are allowed" probably comes from Julia Cameron but am not sure.)

Posted by Louise Halvardsson at 12:07 2 comments: 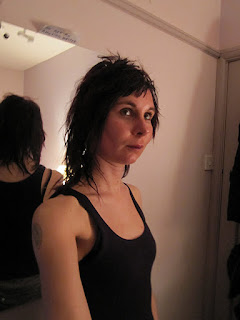 My crisis started last summer when I was 28. For the first time I had no desire to live and it frightened me. It felt like a burden having another 50 years to fill, fill with what?

It felt like nothing could ever match those amazing experiences and that life had become pretty dull. No career (as I'd changed my writing career to England and to writing in English, and was starting from scratch again), no place to live (just renting rooms in other people's houses) and no meaningful relationships.

So for two years I've been walking about in some kind of mist, but the other night under the full moon I had an actual light bulb moment. All of a sudden it became clear to me: I came up with a plan for what I'm going to do with my life. At least for a year, staring on my 30th birthday on the 26th of February. This project involves at least 30 people and I do hope that you're out there! More info later ...
Posted by Louise Halvardsson at 23:50 2 comments: 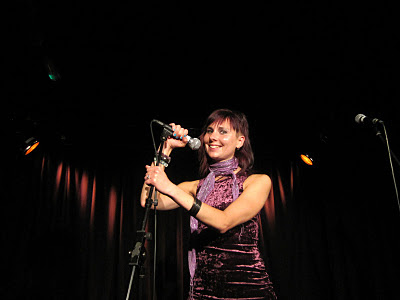 And here I am, performing as Lou Ice, one of the guests
at Hammer & Tongue at Komedia in Brighton,
warming up for another great Swede ... 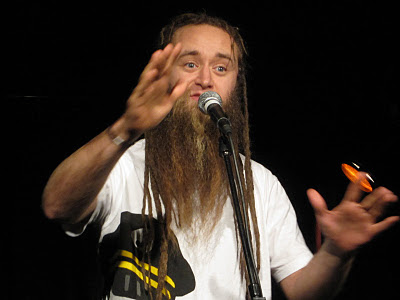 Henry Bowers aka Kung Henry who told us a few things about darkness
As usual it was a great night hosted by Rosy Carrick and Mike Parker. Both me and Henry did a poem each in Swedish which went down well as there were a few Swedish people in the audience. I had recruited them when I did a performance/talk at Loxdale Language Centre last week ...

The open slam was won by a guy called Ed who did an angry poem, defending people who are wrongly accused of being paedophiles. It seemed like the slam was more intense than usual as a lot of people went over the allocated time of three minutes, caring more about the poetry than the points! 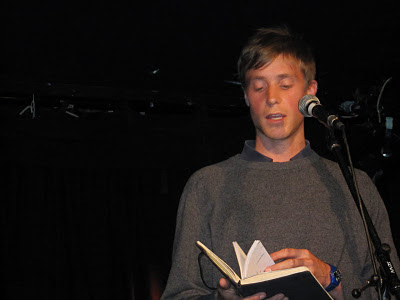 The other guest of the evening was the brilliant story-teller Wilf Merttens.

And thanks to performing I got invited to do two more gigs this autumn. Check it out here!

Posted by Louise Halvardsson at 17:14 No comments: