My short story Sluggish is now published on Flash Fiction World, click here to read it. And submit your own pieces too, you writers out there!

As I've now started my Swenglish project, this blog might be quieter than usual, but please visit Swenglish to see what I'm up to!
Posted by Louise Halvardsson at 19:25 No comments: 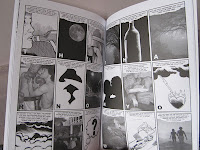 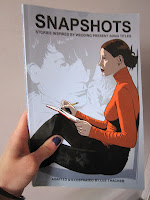 It started with the band the Wedding Present and their excellent song writer David Gedge,
it continued with the writer Louise Hume (in collaboration with Tara Gould from Brighton's Short Fuse/Story Studio Live Lit event) who invited other writers to write stories based on the Wedding Present's song titles.

Some of these stories were read by the writers at the Edge of the Sea Festival in Brighton in 2010.
The stories were liked by the band and the fans.
Finally, illustrator Lee Thacker was invited to "do the drawings" for the stories ...

and the result is a graphic novel!

Apart from my story, I'm From Further North Than You, there are little gems like Mark Sheerin's Brassneck, Erika Szostak's Model, Actress, Whatever ... and Wendy Ann Greenhalgh's The Trouble with Men.

Snapshots is for sale here.
Posted by Louise Halvardsson at 10:32 No comments:

I'm having a prolific poetry period at the moment, preferring to capture my thoughts and feelings in short snappy poems instead of putting them into long stories or novel scenarios. (Probably because my every day life feels very bitty at the moment as I'm preparing myself for my Swenglish journey ...)

Last week I went back to Poets Cornered, the poetry group I used to go to a lot a few years back. They are now meeting in The Farm Tavern in Hove. 8pm every Tuesday. And it's free! Do come along and bring a poem, pen and paper. Or a laptop or whatever device you use.

Read one of my latest poems, "Disembodied" here.


PS. new post in my Swenglish blog about snow.
Posted by Louise Halvardsson at 10:19 No comments: