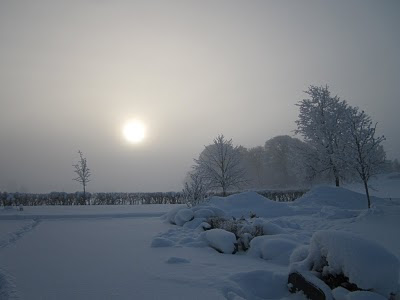 2010 is coming to an end. It hasn't been one of my best years. It has been a difficult year on an emotional and personal level, but when I look back I've had a great deal of success with my writing.

2010 was the year I completed my first novel in English, REPLACING ANGEL, and got an agent interested. In January I treated myself to a writing retreat in Lingfield. In February I sent the MS off. In December things started to happen.

2010 was the year I focused on short stories.

I've had two stories published:
*Lovers of the Planet in the Spilling Ink Review Anthology
*The Butter Dish in Scribble
*Next of Kin was shortlisted for the Ilkey Festival of Literature competition

I also submitted stories to the Bridport Prize, The Asham Award and the Fish Prize.
All in all I wrote about twenty-five short stories, including a few flash fiction pieces. What I haven't done enough of is submitting ...

However I've had loads of stories selected for readings at live literature events in Brighton:

*Foxy Lady and Relax Johnny-Boy have some fun for Are you sitting comfortably?
*Steal from the rich and give to the poor for SPARKS
*Ex Love for Short Fuse Story Salon
*I'm from further North than you for the Short Fuse appearance at The Edge of the Sea festival (the story will also be illustrated and published in an anthology to be sold as The Wedding Present Merchandise)
*Clowntown for New Venture Theatre's Into the Dark story event
*Party is over for the Ace Stories event
*Suicidal Girlfriends for Grit Lit

To make time for the short story events I decided to cut down on poetry (both writing it and performing it.) Yet I got a poem published called His depression in an anthology called Book of Dreams.

These are a few of the poetry performances I did in Brighton (and I said that I'd cut down!):

And I also had time for some very professional things:

2011 was the year I got a permanent part-time job at Hove library.
I'm lucky to be able to combine my writing with a job that involves literature
and organising events and performing poetry ...

All these good things wouldn't be possible without my wonderful writing mates ...
I meet up regularly to do some writing exercises with Morgan & Bernadette, and I also have "creative coaching" sessions with Sue. My coffee dates/drinks/meet-ups with Kay, James, Robert, Saskia, Kristen, Laura are invaluable. And I'm also very, very grateful for the support and feedback I get online. Tim, Brian, Sanna, Solera, Chris, James, Ed ... I hope I haven't forgotten anyone. Sara of course. Anna Liv. Lotus. You know who you are.

I'll celebrate New Year's Eve with my "sister" Johanna in the middle of the forest in the south of Sweden. Then I'll spend a week writing, i.e. revising my novel as the first third drags ... To help me stay focused and not distracted I won't use internet for a week. So if you make a comment on this post it won't show for a while as I have to log in to accept it ... Same with emails and facebook. Don't despair: I'm not dead - I'm writing.

My new year resolution is ...

to keep believing in myself and my writing.

Keep on dreaming, cause when you stop dreamin' it's time to die. - Blind Melon
Posted by Louise Halvardsson at 21:48 No comments: 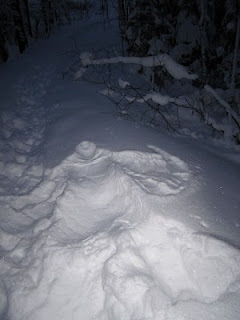 Found a great blog post about six small steps you can take every day towards your writing. It has helped me a great deal. Even during busy days at work I can find five minutes to brainstorm a project or one minute to describe a stranger ...

It's also worth keeping those six steps in mind if you're away for Christmas: stuck on trains or bored at family dinners ...
And I'd like to add one point to the list: go for a walk, even if it's just ten minutes. Reflection time is so important. Whilst the whole of Sweden watched the Christmas Disney special at 3pm on Christmas Eve (a tradition to be missed, same programme every year) I went out for a walk and made a snow angel. 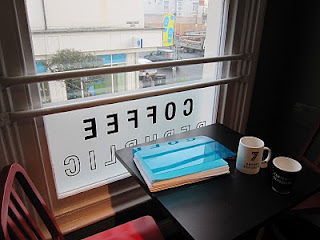 Last Monday I spent about 3 hours in Coffee Republic* in George Street Hove, sipping the same cold peppermint tea. I don't normally like going to chain coffee shops, but it feels more all right to spend hours in a big anonymous cafe than in a small funky cafe. Restaurants are the worst. I once got kicked out of the Regency, the manager telling me it wasn't an office ... I'd spent about 2 hours in there just ordering a coffee and had covered the whole table with files and books and pens ...

I printed the Replacing Angel manuscript and managed to read about half of it, making notes, and carried on reading the rest at home later in the week. I feel hopeful about it, and am looking forward to my planned week of novel revision work in January.

It's so nice to have a novel in my head again. It feels like the short stories I've written this year have "only" been one-night stands or love affairs, some amazing, some boring, but now when I'm in Novelland again it's like falling in love and entering a proper relationship.


*I applied for a job there when it first opened back in 2002, but after going for a group interview session where we had to make potato men I got a call saying I didn't have the right skills. Thank God!
Posted by Louise Halvardsson at 13:13 1 comment: 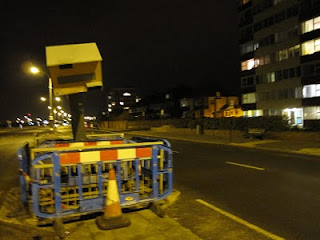 1. Able to be published.

I've spoken to an agent who's read my English novel, REPLACING ANGEL. It's publishable. That's the first thing he told me.

Publishable, but not quite yet.

The first third of the manuscript drags. I'm aware of this. My playwright/drama teacher friend who has also recently read my MS is of the same opinion.

And the title doesn't work, is too cheesy, too obvious. I wasn't aware of this.

The worst though is that I've used far too many Nick Cave quotes ... (Did you know that he crashed his car into a speed camera at the end of my street this week?! Photo evidence above.)

Even though I have a lot of hard work ahead of me I feel excited. The agent suggested that I take some time to think about it all, and then I'll present him with a new version of the MS in a couple of months time. I'm already thinking of spending the first week of the year in my small boring hometown and focus on the re-write, away from the distractions of Brighton.
Posted by Louise Halvardsson at 22:32 3 comments:

The streets of Brighton were gritted enough for a bunch of writers and their hangers-on to make it out last night. It was time for Grit Lit - a live lit event hosted by Amy Riley and Tim Lay. Their show won the award for the best literature event in the Brighton Fringe Festival 2009. Even though some writers were so cold they had to read with their coats on, the atmosphere in the Red Roaster was heated. 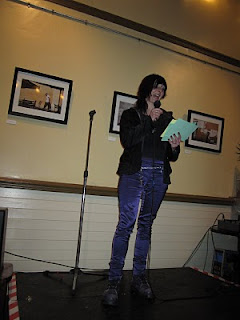 I'm reading my short story Suicidal Girlfriends, inspired by a guy who once told me that I looked like his ex-girlfriend who had committed suicide ... 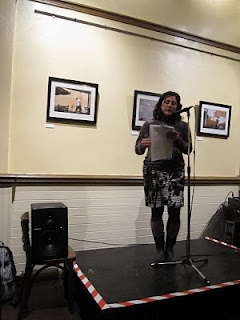 Amy Riley reads from her latest novel which is set in both Brighton and the States. 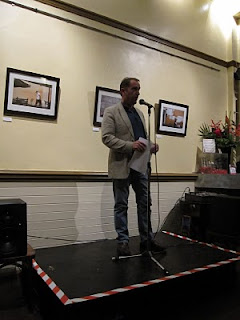 John O'Donoghue shares an extract from his autobiography Sectioned - a life interrupted.

I didn't manage to get a photo of Tim Lay ... But above is a picture of his short story collection Nibs. The story he read last night was about the rave scene and a particular drug called Fubar. 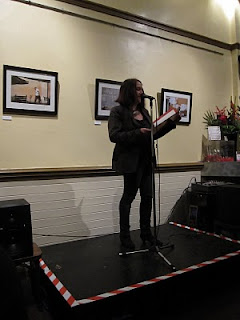 The audience was treated to a story about vintage underwear when Erinna Mettler took the stage. 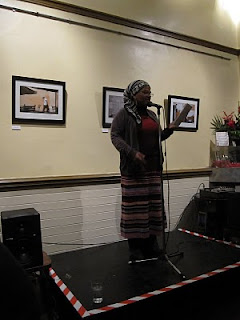 Poet and prose-writer Akila captured everyone when she read rhythmical flash fiction stories about experiences of people with mixed heritage from a hardcore/hidden aspect. 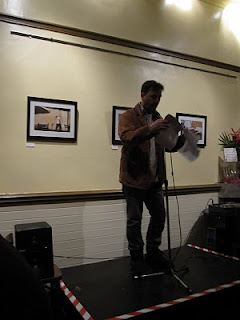 A writer who both opened and closed the night by reading about Batman and meditation was Rob Paraman. I'd not seen Rob for years (we used to hang out at the same writing groups) so it was really nice to hear him read, making me laugh more than once.

Another author, Dan Holloway was supposed to be on the bill as well, but was the only one who couldn't make it because of that damn snow that was gone by the time I walked home, warmed up by rum and good company. Thanks to the few friends that made it out!
Posted by Louise Halvardsson at 20:45 1 comment: