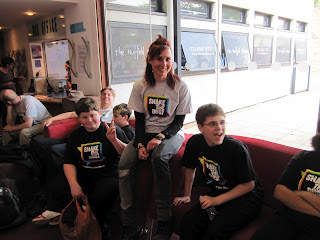 This spring and early summer I've been involved in Shake the Dust - a poetry slam  project run by spoken word organisation Apples & Snakes.

My role in the project was to assist magnificent poetry coach Michael James Parker and together we worked with a team of eight young people from a school in Farnborough.

Shake the Dust is a national project and is part of the Cultural Olympics in London. This Monday it was time for the regional poetry slam final in Southampton where our team was competing against four other schools in the South East of England.

Watching the youngsters on stage was much more nervwracking than being on stage myself ... And when the winners were announed I was in tears. I couldn't believe it ... our team aka The Awkward Squad won! I couldn't believe it, not because they weren't good, but because ALL the teams were good. So much power, so many feelings. Next week we're going up to the national final in London to represent the whole of the South East.

I'm also the Digital Champion for my region which means I represent the South East by blogging. You can read about the final and some more of my blog posts here.

Funnily enough my title during the Shake the Dust project has been "shadow poetry coach" which suits me as I'm a shadow in other people's everyday life through my Swenglish project.  The idea of Swenglish was to give up my room, my job and my usual activities in order to take part in someone else's life, but Shake the Dust has been good for me, to go away about once a week to do poetry workshops has been a chance to "be myself" for a day.

You can read what I'm up to with Swenglish here.
Posted by Louise Halvardsson at 14:32 1 comment:

Great Book About Being an Obsessive Fan 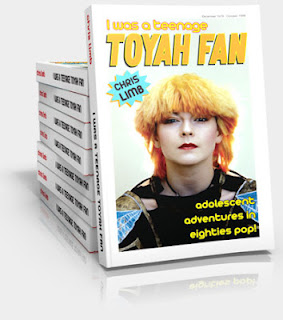 This year I’ve mainly read non-fiction to get inspiration for the Swenglish book I’m writing. The latest book I read is I was a teenage Toyah fan by Chris Limb.

Growing up being a massive Guns N’ Roses fan I could relate to Chris’s story of being an obsessive follower of a music artist. He writes extremely well, doesn’t waste his words and take us on an epic journey from being a nerdy 14-year-old to becoming part of Toyah’s unofficial fan club Angels & Demons and finally being asked to run Toyah’s official fan club, Tellurian.

I haven’t been that lucky with Guns N’ Roses. The closest I’ve come to meeting Axl Rose is seeing him on stage at Sweden Rock two years ago. However Chris’s story is very inspiring and life-affirming. Even if you’re not a Toyah fan you’ll hopefully get a lot out of reading the book as Chris reveals a lot of exciting episodes from his teenage years. He might be have been an obsessive fan, but was never a creepy stalker. I’m also struck by his accurate observations about how you obtained information about your idols before the time of Internet.

Coming-of-age combined with music what more could you wish for!

The book is available here and Chris has written an interesting account on Kindle sales here.

To see what I'm up to on my Swenglish journey please click here.
Posted by Louise Halvardsson at 17:57 No comments: