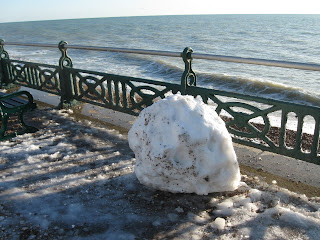 Sometimes it feels like I spend far too much time sitting on a bench, staring out in space and being all at sea ... Do I actually get anything done? That's my biggest worry. If I spend a week or two not writing I think the world is coming to an end ... So to make myself feel better I've done list of everything I've achieved in 2009:

*Started a blog in English - thank you for reading!

*Completed the 2nd, 3rd and 4th draft of Replacing Angel – my first novel in English

*I visited two schools in Växjö for the World Book Day

*I did a talk at a school in Uddevalla

*Took part at the International Book Fair in Gothenburg, workshop for teenagers

*Did a poetry gig at the Peace Festival at Hove Lawns

*Did at poetry gig with Ash French & Daniel Roviera at the Shoreham Beer, Cider & Literature Festival

*Took part in a poetry cabaret show with Jelly Inc. at Bombanes

*I wrote 8 first (some second drafts) of short stories, only submitted one to a Valentine Competition that I’ll know the outcome of in January


Other memorable happenings (good&bad) that are not directly writing related:

*My time in New Zealand, New Year in Golden Bay, living and working at Rosemere Backpackers in Wellington and travelled the North Island with Sky

*Visited my friend Elin in Melbourne

*The death of my grandma

*Got a temporary job at Hove Library after 3 (!) interviews within the libraries

*My best friend Sara married herself and I was bridesmaid

*My "sister" Jo turned 30 and we celebrated her in Copenhagen

Despite struggling with the darkness and cold of winter, Brighton is a cool place to be all year round ... 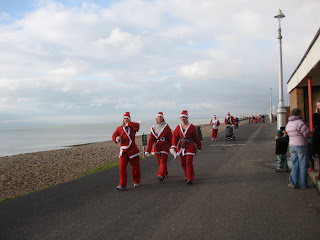 On Saturday I got a surprise when I walked along the seafront and saw an army of running (and walking) Santas! It was the yearly Santa Dash - a 5km run fom charity. (Maybe I'll join in next year, James!) 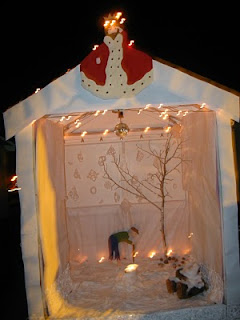 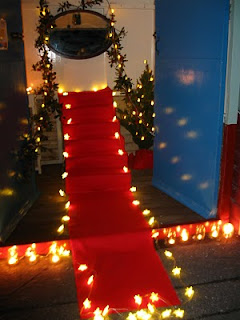 Every night until Xmas a new beach hut is opened up like an advent calender and there's free mulled wine and mince pies. Each hut has also got a carol which the decorations are based on. 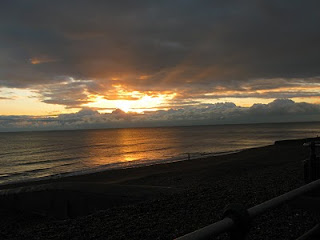 Lastly ... a December sunset is just as beautiful as a summery one.
Posted by Louise Halvardsson at 09:48 No comments: 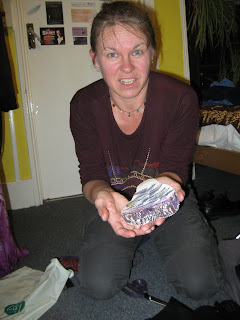 It all began with a text message in February 2008 when I got back to Brighton after my travels. I told my poet friend Sue Pearson that I was back in town and asked if she wanted to meet up and write. She texted back straight away and that was the start of our creative exchange.

The first meetings were all about writing. We did exercises and gave each other feedback on our recent pieces of work. We also set goals. Most of them were writing related, e.g. write a poem for a competition or finish a short story. Then we started to expand.

Sue is taking a bit of a break from writing and is now into doll and jewelery making. And at the moment I'm so focused on my novel that I don't feel motivated to write poetry. So our goals are a bit different nowadays. It could be anything from writing a fan letter to Miranda July to making a richly embroidered stomach. (Sue is showing one of her hand-crafted dolly stomachs in the picture.) For our next meeting (when Xmas and stuff like that don't get in the way we meet up every other week for 3-4 hours)my goals is to plan a writing retreat for myself. I'm thinking of going away for a weekend in January and stay in a hostel or B&B to work on the final bits of Replacing Angel.

Even if Sue and me are making different kinds of art we have a very positive exchange. The creative process of joy and agony is the same and it's great to have the support of another artist. A big part of our meetings are taken up by discussing current projects and sometimes that's all you need: a place to vent your fears and expectations.

James Burt and Kay Sexton have written a lot about workshops and how they are very cautious of them. I've been going to various writing groups or workshops on and off over the years and although I found them helpful and good for networking nothing is as good as having a private creative mentor! I must admit that main reason I sometimes go to groups and workshops is that I need to hang out with other writers in order to feel like a writer myself ... And as a result I've made many good friends like Sue, Morgan, Petra and Bernadette. You need a lot of time on your own as a writer, but without supportive friends you're going nowhere ... Thank you for existing!
Posted by Louise Halvardsson at 09:48 No comments: