Only the teenagers missing at Peace Festival 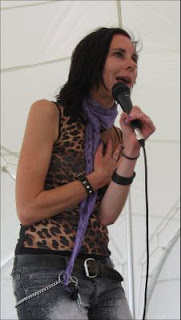 The Peace Festival on Hove Lawns was quite peaceful on the grounds, but somebody must have been fighting in the skies. The wind was unbearable, worse than the rain.
Hopefully I kept some people warm with my poems. I was performing in the so-called Future Tent, aimed at people under 25. The only audience I didn't have was the teenagers ... The ones who came to see me seemed to be either under 10 or over 30! It was particular nice with the support from members from my local poetry group, Poets Cornered.

I did a set of poems about escaping small town life, teenage pregnancy and breaking boxes that people tend to put you in. Yet , I got the best response when I did a poem in Swedish called "A hell of a lot of holes", that is featured in my first novel. Most people seemed to think that it was a rude poem. It's not. It's more about having holes in your brain as well as in your heart.

Thanks Solera for the photo.
Posted by Louise Halvardsson at 10:24