This week my novel (the Swedish one) was reviewed in Jyllandsposten, one of Denmark's biggest morning papers. The review was very positive when it came to the contents of the book, and said I'd captured the teenage angst very well, and that I showed there was hope in the end. However, unlike the Swedish reviewers, this one really hated the cover, title and author pic - saying that it looked like a print-on-demand book. I don't agree with this at all;I love the cover and the pic of me in pink hair.

But the biggest problem according to the reviewer was the translation. Swedish expressions that were unknown to the Danes etc. I don't know Danish, but as far as I know the translator has done a great job. He emailed me every week asking things, making sure to get it right ...

Yet. It's a bloody difficult book to translate. People ask me daily why "Punkindustriell hårdrockare med attityd" is not translated to English. I have two answers.
1. I'm not confident enought to do it myself, as I know it's a very site specific book and I've used expression that only exist in my hometown.
2. I haven't found the right translator. It has to be someone who's native English, but has spent years in Sweden, and has a thorough understanding of the school system and the youth culture.

Click here to read the review - if you understand Danish that is ...
Posted by Louise Halvardsson at 11:29 No comments:

The Head is Out 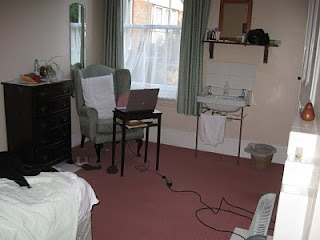 In this room I started to give birth to Replacing Angel.
It is almost out. You can see the head and the torso,
and even what sex it is. But the legs and feet are not out yet.

(I re-wrote every single scene where the Man appears and it felt like I really got to know him. Thanks everybody who left comments and discussed the matter with me before I left, it helped a lot. I also cut a bit of the beginning to increase the action.)

My retreat at Claridge House in Lingfield was the best thing I've treated myself to for a long time. I reclaimed the feeling of peace I felt when I used to stay with my grandma in the countryside in the Sweden. Since she passed away two years ago I've been at loss, looking for a place where I can go and just be and write and go for walks in nature and have all my meals cooked for me. And I think I've found that place. Instead of spending the money on a return flight to Sweden I can spend the money on going to Claridge house when I really need to.

This is what made it such a peaceful and productive stay:

*I had my mobile turned off the whole time and for a day after I got back. (I often keep it turned off or on silent anyway and find it helps my thoughts flow more freely when I'm not interrupted my little bleeps.)
*I didn't use Internet during my stay or on the day I got back. (I realised that I spend a lot of time thinking about things I've read on Facebook and am constantly going through emails in my head that I need to write etc. Internet is a bit like alcohol. You need to learn when too much is too much. From now on I'll try to only go on Internet once a day and for a limited time.)
*The house is run by Quakers - who worship through sitting in silence and I took part in some of the silent times during the day and found it refreshing. The walks around Dormansland Village also helped.

I know I expected that I would give birth to the whole novel when I was away. But there's no point it rushing it. I'm hoping to see the legs and the feet at the end of this month ... Then I'll start working on a synopsis and cover letter that I can send out to agents.

So if I appear to be absent or don't return texts or emails you'll know why ...
Posted by Louise Halvardsson at 22:39 1 comment:

Pregnant in the 27th Month 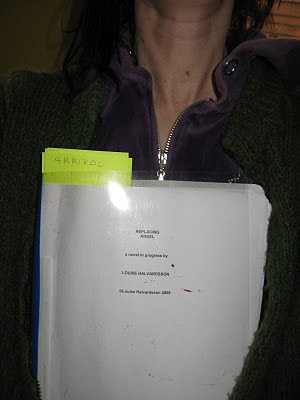 Twenty-seven months have passed since I got impregnated with Replacing Angel (even if I didn't have a name for it then). I've really gone over the time and I can feel it.

Inside me is a completed novel. I just have to perfect it.
There are mainly three areas I'll have to work on:
*the beginning
*the end
*the character the Man (I'm now reading The Game by Neill Strauss and re-reading The Dark Part of me by Belinda Burns for inspiration.)

To help the birth process I'm going away on a retreat this weekend.
Leaving Friday midday and coming back Monday midday. Two full days to just write write write, while all my meals are cooked for me. There won't be any distractions - apart from the beautiful gardens. But it's not good with too much exercise when you're pregnant ...

PS. I don't believe in perfection and am far from a perfectionist. But I'm hoping to reach a stage where I feel happy enough with the novel to send it out to agents.
Posted by Louise Halvardsson at 18:59 No comments: 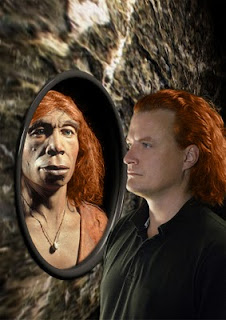 I've recieved some more feedback on Replacing Angel from writer Robert Dickinson. He read my novel in three settings on his train journey to work and said it was easy to read and well-paced. Overall he liked it, it was just one major problem ...

The same major problem I've had since I started writing this novel: the character called the Man. He's an annoying manipulative man who believes in conspiracy theories. Despite this all women fall for him. Do you know the type?

I've always been fascinated with the fact that so many women fall for complete psychos. So that's what I've been trying to write about. But I've failed. The Man is not charming enough. He doesn't have enough charisma. Three of my four critics have said the same thing: they can't understand why the main character Natalie falls for the Man. It's not enough to state that he's sexy. And he's not sexy in a traditonal way either ... He's got red hair.

So how can I make the Man more charming? How can I SHOW his charming side, rather than TELL it? Please help me!
Posted by Louise Halvardsson at 10:18 4 comments: 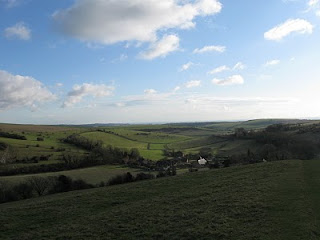 I spent the last evening of 2009 in the company of good friends in a cottage in the countryside outside Brighton. And I started 2010 with a walk on The Downs thinking about what my intentions are for this year.

*I'm going to trust and follow my intuition and gut feeling

The big goal over all is of course to complete my novel Replacing Angel and send it off to agents and find a publisher. My plan is to go away for a weekend in the beginning of February and add the finishing touches.