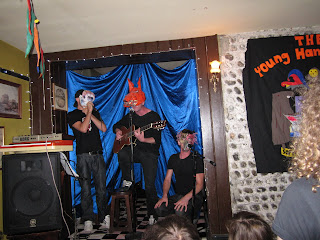 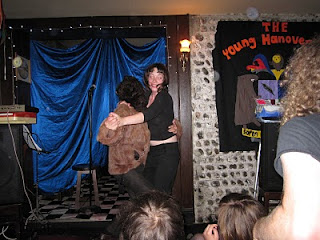 Absurd? Bizarre? Surreal? Avantgarde? I love it when I'm unable to label something. It means it's original.

Yesterday I went to Zoo Gun 91 (normally called Glue Gun 91) hosted by The Young Hanoverians a.k.a. Chris Parkinson/Polymath/Rufus Moonshine & Amy Atkins/Gimley Whipple/Morag (excuse me if I forgot any names).

As I've been to Glue Gun 91 before, I knew it was worth going, even if I only got four hours sleep before, was in a bad mood and was facing a moral dilemma.

Glue Gun 91 is the kind of event that will alter your state of mind. It's impossible to be bored when swans die, bears dance, people have sex with dolphins and when there's a trial because a whale has been bereft of half its body. The housebound house band for the evening was the Land of Pointlessness (see first pic) that performed songs/raps about their cat.

The best moments are not captured in pictures though. I was too busy enjoying myself!

Last week I went to see A Bedroom Farce at Theatre Royal, but the day after I'd already forgotten about it. Glue Gun 91 is a perfect example that you can be thoroughly entertained by (not yet) famous people, and without paying a fortune.

It's inspiring to see how people like Chris & Amy put so much love and creative effort into what they're doing, making props and stage outfits. It's worth coming to Glue Gun 91 just for their original way of announcing breaks and encouraging the audience to clap and cheer.

Currently there's no fixed date for the next Glue Gun 91, but look them up on Facebook and join their group!
Posted by Louise Halvardsson at 11:05