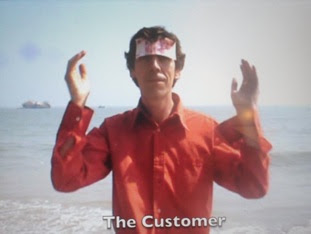 Yesterday I went to see a performance art show in the Brighton House Festival called The Customer is Always Wrong.

Bill Aitchison spent three months as artist in resident in the small Chinese town of Xiamen. He started to create a show based on his time in China, writing it in English, but realising it didn't ring true, so he wrote it in very simple English, and then asked someone to translate it into Chinese. He then learnt the Chinese script by heart, and studied the meaning of every single word and developed it into a very physical performance piece, speaking only in Mandarin. However he had a Chinese girl reading the English translation after each spoken line.

The translation wasn't a professional translation though, it was done in a translation programme similar to Google translate (Bill found the Google version to be "to good", not producing the word by word translation that he was after.) One purpose of the performance was to play with the idea of "Chinglish", refering to the badly translated English that exists in China, and also the bad Mandarin spoken by visitors to China.

Watching and listening to the show gave me the same kind of confusion you experience in a foreign country where you don't speak much of the native language. You could follow the English translation, but you had to concentrate to be able to understand what Bill was trying to communicate. He talked about his experience in China, how he felt "wrong" because he was taller than everyone else and there was so little space. He kind of liked this feeling though, knowing things were "wrong" or "weird" because he was foreign. If you feel "wrong" or "weird" in your own country you don't have an excuse ...

What I found most fascinating was that the Chinese word for tourist is "walking guest" which explains Bill's marching movement when he was talking about tourists. What I found most surprising was Bill standing on the table/till of the Spiral Charity Shop (unusual venue I know!) and dancing to Backstreet Boys (big in China)!

I could relate very much to Bill's performance as English is my second language. He also transported me back, making me remember the five months I spent in Thailand. How weird it is to be looked up to because the local people think you are very rich ... And you are rich compared to them, but not in your own country ...

I love performance art! If you get a chance, check out Bill's stuff on his website and here you can watch a preview video (which doesn't make the performance justice, but you get an idea).
Posted by Louise Halvardsson at 21:02