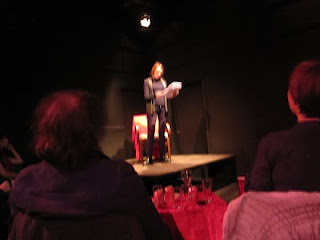 The Short Story evening at New Venture Theatre Friday went really quickly. You'd think that you'd feel exhausted after hearing nine stories, but I wanted more! Although it was nice to have time to catch up with people in the bar after.

It adds to the entertainment factor that actors are reading out the stories submitted by writers. Gayle Dudley who read my story Clowntown was brilliant and made the story more justice than I could've done myself, putting on a very creepy low clown voice. 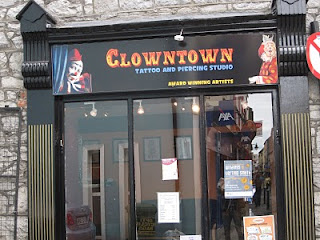 I got the inspiration for Clowntown when I was in Ireland and came across a tattoo shop in Ennis called Clowntown. Also James Burt had challenged me to write a story about a clown ... His device is to add a clown to your writing whenever you get stuck ...

This is the beginning of Clowntown:
"Penny didn’t look happy when I turned up at her doorstep after dark. It wasn’t just that I was late and the food had gone cold – I’d brought a clown with me."

Other highlights of the night was the host Sarah Charsley's story Ghost Sex (the title says it all!), and Louise Hume's story about a woman who preferred a house to a man. Needles to say the theme for the evening was Into the Dark.
Posted by Louise Halvardsson at 16:46