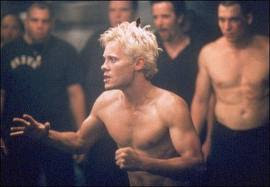 Next Write Club session is in October, but James and Ellen are also hosting other workshops. Check it out here.
Posted by Louise Halvardsson at 10:25