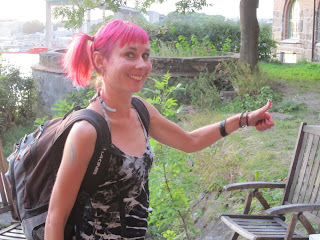 It's not the muscles that count in this new art form and sport ... Metaphor wrestlers battle with words.

This weekend I took part in an exclusive workshop in Gothenburg that resulted in a show where eight wrestlers improvised metaphors on stage to the beat of a live band in a dark room.

More scary than taking part in a Poetry Slam, that's for sure. But what helps is that you create a wrestling character and I am Backpackia! And Backpackia is the thumb that was on its way to Thailand but ended up at the local supermarket ...